Rotary began as an idea more than 100 years ago. Today, Rotary flourishes worldwide with 1.2 million members in more than 200 countries and geographical areas.
Rotary History and Archives is the authority on Rotary’s rich, evolving history. Located in Lincolnwood, Illinois, USA, the History and Archives team continues to update and provide access to its collection of tens of thousands of items from all over the world.

Read more at the History of The Rotary Foundation and History of Rotary International pages. 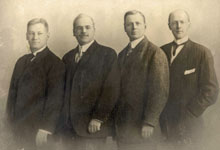 The Rotary Club of Chicago is considered to be the world’s first service club. Established by Paul P. Harris, an attorney, in February 1905. Harris wanted to recreate the kinship of his small town youth through a professional club. The original meetings rotated from one members office to the other, hence the Rotary name.

Rotary continued its growth. Within 10 years, there were clubs from New York to Winnipeg to San Francisco. By 1921, the year the Winchester Rotary Club was formed, there were clubs on six continents. In 1922, Rotary became Rotary International.

The Rotary Club of Winchester continues to grow and thrive. As we now prepare to embark on our 90th year, we continue to strive to achieve the original ideals of rotary set forth over 105 years ago.

A HISTORY OF THE ROTARY CLUB OF WINCHESTER 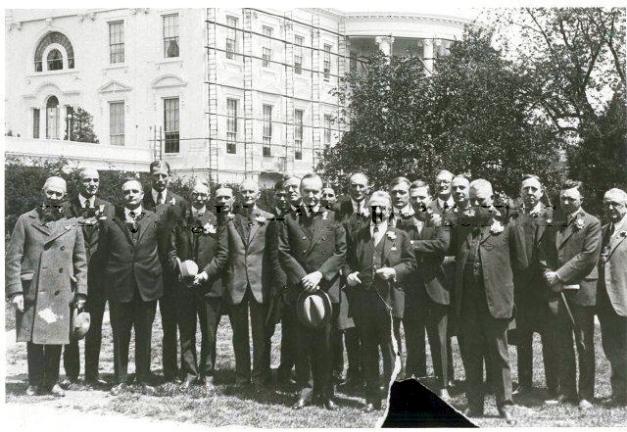 During the month of September 1919, on or about the 18th day thereof, a lone human, unnamed and unheralded, poked his curly head into the private sanctum of John Richardson, Secretary of the Chamber of Commerce. He found this personality, who could sell himself for a large salary, but could not sell the biggest thing in the State of Virginia – WINCHESTER – (Motto: “A little man for a little job, a big man for a big job”) to be a congenial fellow, and upon his advice letters were dispatched to Mr. John Wood and Mr. Dave Sites, of Roanoke, Virginia, who were well-known Rotarians.

They answered in true style, giving addresses of the District Governor and the Secretary General of the International Association of Rotary Clubs. A letter was written to Mr. Rogers P. Davis, District Governor, Charlotte, N.C., and one to Mr. Chester R. Perry, Secretary of the International Association, Chicago, Illinois. These letters were dated October 9, 1919. Answers and literature were duly received, but before the material was digested, our well-met friend, Mr. Richardson, had taken his belongings and departed to realms of bigger salary.

Things went quietly along until sometime during the early part of the year 1920, when a personality by the name of “Red” (T. Russell) Cather approached “Parson” Clarence Woods in this manner – “Say, what do you know about Rotary?” The answer was, “Nothing, but I am a beef of a student.” Whereupon he said, “Lets get together.” “Right” was the reply and they did. Literature was secured, a study made, and finally a meeting called, to be held in the office of Mr. Cather, at which were present T. Russell Cather, H.D. Fuller, Harry Byrd, R.L. Gray and Clarence Woods. R. Gray Williams was present by his proxy, T. Russell Cather.

Plans were discussed and letters written to Mr. Joseph Turner, The District Governor at Hollins College, VA. Thus, was the first seed sown for the establishment of Rotary in Winchester.

This seed lay dormant until October 11, 1921, when Mr. Fred E. Clerk, Superintendent of Schools, addressed the following letter to the men selected to be the charter members of the Winchester Rotary Club.

In response to a manifestation of interest on the part of a number of Winchester citizens, under the date of September 6, 1 received communication from Crawford C. McCullough, President of the International Association of Rotary Clubs, asking me to serve as chairman of an organizational committee for the purpose of organizing a Rotary Club in the City of Winchester.

I accepted this appointment and asked Mr. W.W. Glass, Rev. Clarence Woods, Mr. H.B. McCormac and Mr. William B. Cornwell to serve on the committee with me.

As you probably know membership in a Rotary Club is extended by the club to a man – who it appears – could measure up to the high standards of Rotarian principles, and membership is restricted to one representative from each classification on the basis of vocation or profession.

This invitation is being extended to twenty men. It is an invitation to become a charter member in the Rotary Club of the City of Winchester.

On Thursday evening at 6:00 p.m., in the Elk’s Club building there will be a meeting of the charter members for the purposes of organization and conference with representatives from the Harrisonburg Rotary Club. A good supper will be provided at a cost of $1.25. If you are not familiar with principles of Rotary and the activities of this organization, I hope you will come to the meeting and find out from those who are already in it what these principles and motives are. It will enable you to make a more satisfactory decision as to whether or not you ought to join.

We trust that you will find it possible to accept this invitation and join with a club of strong men in a well-organized effort to promote the best interest of the community.

P.S. This will be a F.E. Clerk “Tokes” chicken-waffle supper.

The foregoing letter was addressed to the following citizens of Winchester:

It was the unanimous opinion of the group that a Rotary Club should be formed and in accordance with the wishes of the group. F.E. Clerk appointed a nominating committee with W.B. Cornwell as chairman. This committee nominated F.E. Clerk for the office of President and W.W. Glass for the office of Secretary-Treasurer, both of whom were elected. The following were elected to serve as directors: H.B. McCormac, Clarence Woods, W.B. Cornwell, Hunter H. McGuire and C. Vernon Eddy. A ballot for the selection of Vice President resulted in the election of H. Douglas Fuller to the office.

With the exception of the changes contained in the above the standard bylaws and constitution of the International Association of Rotary Clubs were adopted and the meeting was adjourned. ROTARY WAS ALIVE IN WINCHESTER!!

The first regular meeting after organization was held at the Evans Hotel. The meeting place was then changed and the luncheon meetings were held for the next few years at the Fairfax Club. Meals were prepared and served by ladies of various church groups. An evening meeting was held each month at a member’s home or was devoted to outings of one type or another.

Though the songs of Rotary rang loud and long at these early meetings, never once was it forgotten that the club was organized for the benefit of the community as well as the membership.